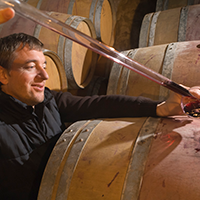 Widely considered to be one of the best producers in Slovenia, Edi Simcic`s wines are truly unique, stoically traditional and proudly Slovenian. Three generations are still at work here, passing knowledge and experience from father to son every day. Edi himself is still very much a key character at the centre of the business, with his son Aleks working alongside him and taking the winery into a new era, while Aleks` two sons learn their trade to take up the family mantle one day.

Historically, Slovenia has experienced more than its fair share of hardships, re-shaping the lives of the whole population. In the case of Goriska Brda, the whole region was under fascist rule by Mussolini`s Italy up until the end of World War II, after which it passed into Communist rule as part of the re-established Yugoslavia. Like many other regions in the area, Goriska Brda`s whole agricultural industry suffered greatly under Communist rule, as all growers were expected to surrender a large portion of their grapes to the government, thus leaving growers with no resources to even consider quality growing and winemaking. Upon independence and the formation of the Republic of Slovenia in 1991, the family spared little time in pursuing their true calling as one of the leading winemakers of the country.

Today their reputation is well-established, very deservedly so. Everything about Edi himself exudes gentleness, and this certainly comes across in the wines, thanks to patient growing, gentle handling in the cellar and utter perfectionism when it comes to ageing. Down in the cool cellars, none of the wines are rushed to be ready, and a masterful use of oak results in complex and slightly (but very attractively) oxidative wines. Within Edi`s wheelhouse is a delicious Chardonnay, a wine he considers to be the first step everyone must take to fully understand his approach, after which comes the Sivi Pinot, the local name and style of Pinot Gris. The defining grape and wine of this project and indeed region is the indigenous Rebula, the true jewel in the Edi Simcic crown. Finally, the range is rounded off with a red called Duet, a harmonious blend of Merlot, Cabernet Sauvignon and Cabernet Franc. These wines are very special, and Edi and family have worked tirelessly to show the world what their region and country is capable of. This is Slovenia.
New here?