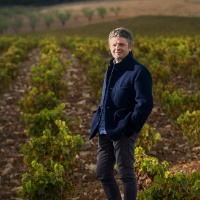 Even once he made waves with his Priorat wines, Álvaro's pioneering spirit never wavered. In 1997, Álvaro and his nephew Ricardo Pérez Palacios were seduced by the undiscovered potential of the Bierzo region in north-western Spain, a place then better known for agriculture and its gold mining past.

Bierzo is home to the Mencía grape, often grown on very steep, precipitous slopes on pre-Cumbrian soils, some of the oldest soils in Europe. The region's, and indeed Palacios's, most famous vineyard 'La Faraona' is at the highest point of the hill of Corullón, at an altitude of almost 1000 meters and lies on a tectonic fault. This combination of altitude, old vines and complex geology gives an incredibly intricate, ethereal and spell-binding wine. Indeed, these Mencia-based wines, down to the region's flagship wine, Petalos, perfectly express the wild and untamed character of Bierzo. look for aromas of wild thyme, dried lavender and roses, underpinned by an underlying graphite-like minerality.

Bierzo is on the Camino del Sangiago and in fact, the route used to go right past the old Palacios winery in Villafranca del Bierzo. More recently, Álvaro and Ricardo have built a new state of the art winery in amongst the vineyards of Corullón, better suited to making and storing the region's best wines.
New here?