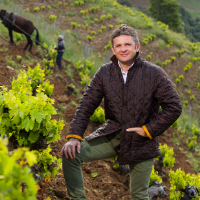 Álvaro Palacios is one of a group of winemakers credited with putting Priorat back on the viticultural map. After studying winemaking in Bordeaux and a subsequent stint working at Château Petrus, Álvaro decided not to return to his family winery in Rioja. Instead, he followed a group of intrepid winemakers, including René Barbier, to the rugged and forgotten region of Priorat. This was the 1980s.

Nowadays, Álvaro makes some of the most highly regarded and sought-after wines in the region, whether it's from his Finca Dofí vineyard (the first vineyard he acquired, in 1990) or the region's most famous wine, L'Ermita, the first wine to use the Gran Vinya Classificada (Grand Cru equivalent) qualification.

Álvaro's work on redefining the Priorat classification has been very important in helping to elevate individual villages and vineyards in this region. The early use of international varieties like Cabernet Sauvignon is eschewed in favour of local varieties. The focus now is very much on Garnacha and Cariñena (locally known as Samsó), both much better suited to expressing the characteristics of this rugged terroir and its licorella soils. Álvaro's Priorat wines are elegant, always profoundly layered, mineral, and expressive.
New here?