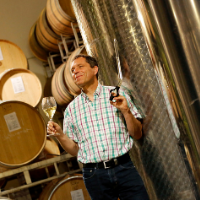 The award-winning Weingut Schwarztrauber is located in the heart of the Palatinate, situated in Pfalz between Neustadt Weinstrasse and Deidesheim. The estate was officially founded in 1959, when Walter and Gerlinde Schwarztrauber decided to convert their mixed-use farm into a winery. But it was their son Gerhard who, after studying winemaking and falling in love with organic viticulture, convinced his parents to convert the farm. In 1986 Weingut Schwarztrauber joined the Bioland association, the largest organic association in Germany, and Gerhard officially took over in 1994.

Today Gerhard farms 18 hectares of carefully managed vineyards (although his father still helps out) and oversees the cellars. They keep yields small and seek to preserve the ecological balance in everything they do. In the cellar Gerhard`s approach is measured and minimalistic-fining and filtering are kept to a minimum, and only small quantities of sulphur are used. Both the Riesling and the Spätburgunder are delightfully fresh and transparent expressions of Palatinate terroir. The family`s pursuit of high quality fruit combined with a respect for the region`s traditions means they are part of a top group of German organic winegrowers.
New here?