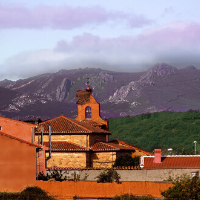 Fuentes de Silencio was founded in 2013 on the banks of the Jamuz River, to the south of the province of León. The winery gets its name by the fact that this town had many water reserves and was called 'the town of fountains.' This passion project is led by oenologist Marta Ramas along with owners Miguel Angel Alonso and his wife Maria Jose Galera. With old pre-phylloxera vines yards, many of which are over 100 years of age they grow the native varieties of Mencía and Alicante Bouschet in very carefully dictated plots. They currently have 24 hectares of vineyards and plantings of Mencía, Alicante Bouchet, Prieto Picudo, Palomino and Godello. Galician influence here is notable, characterised by the presence of sandy soils and Mencia at high altitudes (800m above sea level) and a continental climate.

Although wine has long been produced in Jamuz, it has done so quietly. This small team is working to bring the essence of the territory back to life and ensure that each of their small plots reaches their highest potential, while implementing environmentally-friendly winemaking practices and placing importance on the use of traditional methods. Not only are they is the team creating high quality, exceptional wines of very limited production but they are adding new value to this tiny, relatively unknown region. Jamuz is back on the map.
New here?