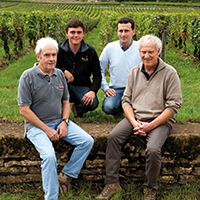 The creation of Domaine Henri Gouges in 1920 was the culmination of four hundred years of grape growing within one family. It has remained an undivided family property as the transition continued from Henri to his sons Marcel and Michel, to the next generation of Pierre and Christian who have recently turned it over to Gregory and Antoine Gouges. Located in the heart of the Côte d'Or in the village of Nuits-Saint-Georges, they have expanded their vineyard shares to thirty-six acres and have invested in a modern gravity flow winemaking facility where they produce Bourgogne, Village and Premier Cru wines.

Henri's philosophy was based on the old maxim, "It is on the vines that great wines are made" and this has endured through each subsequent generation. The Gouges' take great care to nurture the soil and vines, and this simple philosophy yet challenging undertaking has has led to production of the highest quality fruit while controlling yields for an optimum final result in bottle. The domaine has been certi?ed organic since the 2008 vintage. When Gregory Gouges took over the winemaking from his uncle Christian Gouges in 2007 he quickly set about making signi?cant changes to the winemaking: introducing whole berry pressing, partial carbonic maceration and no extraction of harsh tannins from the seeds. As a result, these wines are now very approachable in their youth, whilst still keeping their capacity to age.