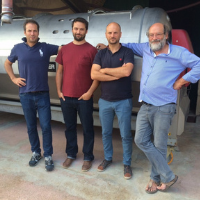 Following his father`s death in 1971, Michael Latz returned home to look after the family vineyard in Correns, Provence. It was then that his burgeoning passion for winemaking and the local terroir flourished. Elected mayor in 1995, Michael encouraged the village to switch to organic farming, paving the way for its status as France's 'First Bio Village'. A collective success indeed, this established Corren's reputation for organic agriculture.

Vineyards are planted across three distinct plots; the Argens plain which takes its name from a section of the Riviera, the Broves on iron-rich soils, and the site of Tras La Garde on stonier land. Since 1995, all plots have been farmed organically. Over the past decade, the family has acquired several well-selected hectares of vineyard and now produces three cuvée. By 2022 a new ultra-modern cellar will be finished. The fourth generation of the Latz family is now firmly involved, as Michael is joined by his grandchildren in the vineyard and winery.
Cookies